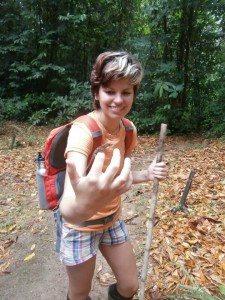 Alyssa Wethington has not had her hair cut or colored in over three months. How can this be? Her older sister, Lauren, is a designer at One Salon. Well, Alyssa has a legitimate excuse. She was off the grid. No, really, I mean literally OFF the grid. Alyssa has spent the last three months in the Costa Rican rain forest doing a research internship. “I think she was living in a tree house in the jungle or something,” laughs Lauren. “She had no internet, no cable, no cell phone service and definitely no hair salons.”

Alyssa was at the Campanario Biological Station which lies in the humid tropical Pacific lowlands of the Osa Peninsula in Costa Rica and stretches nearly 170 acres inland, with elevations from sea level to 155 meters above. 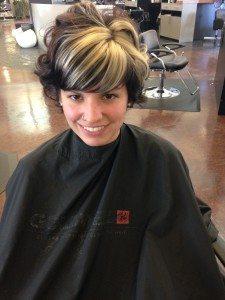 However, a visit to Campanario’s tropical rain forest is not for everyone. Campanario is a remote reserve. It is accessible by boat only. Transportation around the reserve is by foot and climate control is a nice breeze. There are no TVs, telephones or a maid service. The average daily temperature at the Field Station is 75-77 F and the average year sees 4-5 meters of rainfall, making Campanario one of the wettest areas in Costa Rica and the world.

“It was an amazing experience, one I will never forget,” says Alyssa. “It was so beautiful, remote and peaceful. It is definitely taking me a while to assimilate back into the technological world.”