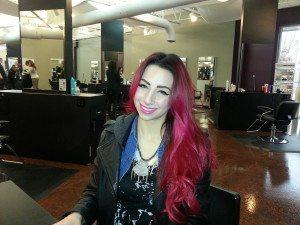 It’s always bittersweet when someone from our One Salon family moves on. Especially when it is a young designer that you hired, mentored and became personally invested in because of her potential.

I remember the first time I met Abbey Nichols. She walked into the salon, and without hesitation, eagerly asked me if we were hiring designer assistants. Now I’ve met many girls similar to her in my previous life working in the “Detroit Scene” as a marketing honcho, for 89X, Metro Times and other media companies. She was 20 years old going on 80. Young, striking, edgy, fashionable, and armed with big dreams and the naïve confidence that is synonymous with youth.

My reply to Abbey was, “Are you cool? Not like Fonzie, I mean do you want to be a superstar? Cuz that’s what we are looking for in any new assistant we add to our team”. 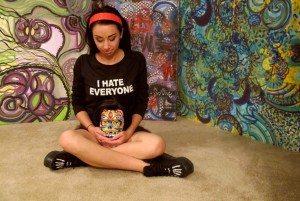 Now most girls her age would have been derailed by such a weird response, or interpreted it literally, but Abbey new exactly what I meant. Did she possess the passion, the emotional fortitude and humility required to learn how to be great? Was she ready to put herself out there and be vulnerable and let us mold her? Would she get back up after she gets knocked down because you have to first try and fail in order to learn how to succeed.

Abbey stared me straight in the eyes and replied, “Someday I will do hair at Fashion Week in New York City.” Well played. 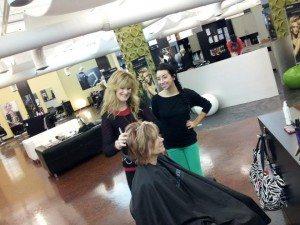 We hired Abbey and over the course of the next year, she served as assistant to our Owner, Janine Exline and our Education Director and former TIGI Platform Artist, Jeanine Cushion. Like any young designer she had a lot to learn, but was eager to do so. Did she make mistakes? Yep. Did she get knocked down? Yep. Did she get back up? Like a champ. Abbey’s passion and willingness to learn fast tracked her through our in-salon education program and quickly landed her behind a chair. And she did it all without a sense of entitlement, which is very rare for young adults these days.

After spending another year working behind the chair at One Salon, Abbey recently notified me that she was going to move to New York. I was disappointed, but not surprised. Abbey has big aspirations. And unlike most people who just talk about what they want to make out of their life, Abbey was going for it. Two weeks later, she moved to New York to chase her dream. A week after that, she landed a gig at Garren New York, the prestigious salon owned by the man that has been the fashion leader in hair for over 4 decades. 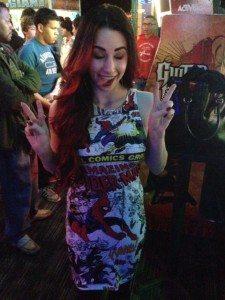 Abbey’s path can’t help but remind me of another member of our One Salon team who left Detroit in her early 20’s to chase her dream…our owner, Janine Exline. She took New York City by storm and made things happen as salon manager for Warren Tricomi in Manhattan. Eventually Janine would return to Detroit, bringing with her  all the knowledge and expertise she learned to create One Salon.

Perhaps one day Abbey Nichols will do the same, or perhaps not…New York City is a seductive mistress. Until then, we will look for her backstage at Fashion Week and smile with a sense of pride knowing that we had a hand in preparing her to become a superstar.