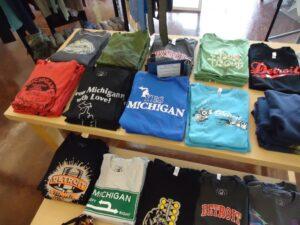 In 1991 Detroit Manufacturing Designer, Robert Stanzler, started a new kind of design company – one dedicated to the exploration of Detroit’s identity through design. Operating and manufacturing in the city of Detroit, Detroit Manufacturing is forging a link between Detroit’s celebrated past and its dynamic future. Stanzler’s designs have been on the pages of Details, GQ, Rolling Stone and Glamour magazines. They have been worn by Eminem, Iggy Pop, The White Stripes, Ted Nugent, Kid Rock, Foo Fighters, Queens of The Stone Age, Coldplay, U2, Outkast, Oasis, Beck, Metallica, Aerosmith, Nine Inch Nails, Beastie Boys and Kings Of Leon to name a few.

When his brand was purchased by Kid Rock in 2005 and subsequently moved (by its new owner) to the North Oakland County suburb of Clarkston, Stanzler left the company to start a new brand in the city of Detroit. Detroit Manufacturing is the continuation of Stanzler’s vision – globally viable design based on Detroit’s identity, locally produced and city of Detroit based.